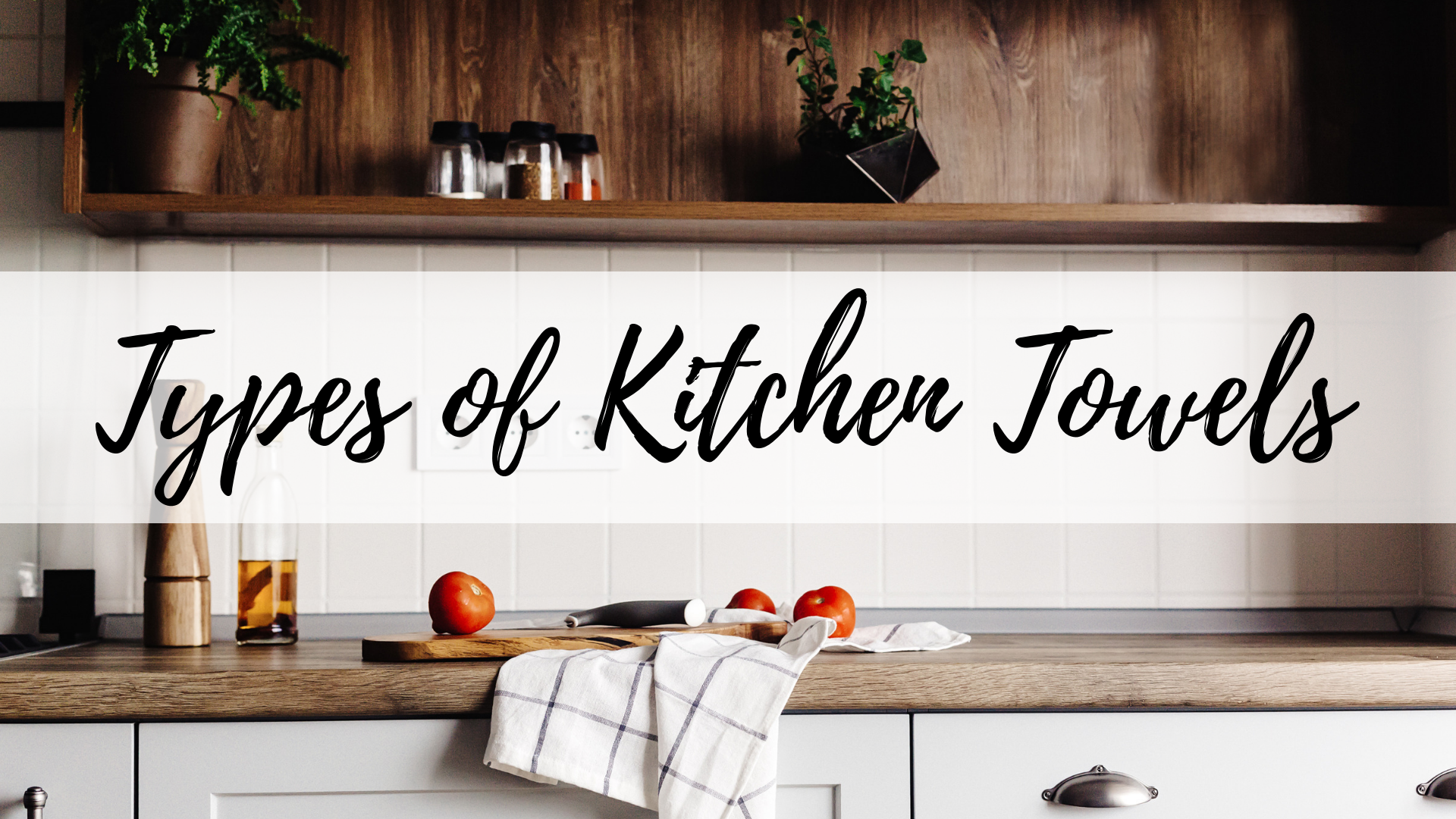 Over the years and around the world, people have used a variety of tools to help cook, clean, and decorate their kitchens. Among these, the most useful and versatile tool, the towel has helped to keep families healthy and happy by allowing us to do simple but vital tasks. Whether it is for cleaning, drying dishes, polishing fine china, printing, or embroidery, there is a type of kitchen towel that is right for the job.

What is a Kitchen Towel? 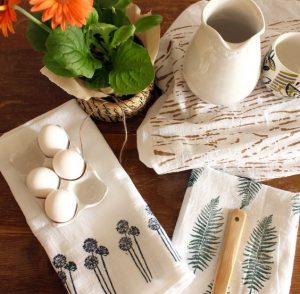 A kitchen towel is quite simply any towel meant for tasks done primarily in the kitchen. They are more durable than other towels and made for absorbing. Kitchen towels are also hemmed with thick stitching around the edges for reinforcement, better keeping the towel intact over time. In addition to being aesthetically pleasing and accenting your kitchen’s décor, kitchen towels are functional and one of the most versatile items you can have in your kitchen. They can accommodate a wide variety of tasks such as:

Today there are a variety of types of kitchen towels coming in all sorts of colors, patterns, materials, weights, and sizes all suited for different tasks around the kitchen. Clean spares of kitchen towels are often kept on hand so that a fresh towel is always on standby ready to come to the next spill’s rescue. It’s also recommended to have multiple kitchen towels in-stock to ensure that every time you clean, do dishes or cook, you always have a fresh, clean towel ready to no matter how messy the situation.

What Materials are Used for Kitchen Towels? 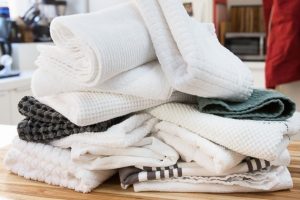 Kitchen towels can be found in a variety of materials such as linen, cotton and terry cloth.

The most absorbent kitchen towels are made from looped terrycloth material that’s great for drying hands and wiping countertops. However, the lint that terry towels can sometimes leave behind means that, despite how most people use them, terry towels actually shouldn’t be used around food or to dry dishes at all. Tightly woven cotton materials like those use for flour sack towels are also quite absorbent yet they do not leave behind lint. 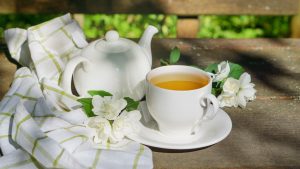 What is a Tea Towel?

“Tea towel” is an English term used to describe types of kitchen towels like dish or flour sack towels. Traditionally, tea towels were made from soft thin linen material and used for drying or wiping a body or a surface. Historically, they were mainly used as décor, embroidered with beautifully intricate designs and made to match the rest of the kitchen’s lavish linen set.

Tea towels were also used to dry and polish fragile dishes too precious to trust in the hands of clumsy housemaids and in tea service, both as tray liners, as well as to cover scones or a teapot to keep them warm. Traditionally, tea towels are found in abundance in Ireland and England, countries where tea is a daily ritual. 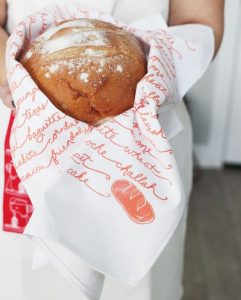 A tea towel, on the other hand, is a kitchen workhorse with dozens of uses, including many DIY projects that take the simple tea towel out of the kitchen and give it life anywhere else you live, work, play or entertain. Tea towels come in a variety of sizes, materials, and colors and are used to accent kitchen décor in a number of ways.  For example, they can be displayed neatly folded over oven door handles or hung on a designated hook to add a splash of color. They can be simply folded and stored neatly away in a kitchen drawer ready to come in handy one day.

Aside from décor, tea towels can also serve functional purposes such as dusting wooden surfaces and polishing fine china, jewelry, furniture, and other kitchenware. Tea towels can also be used when serving things like scones and muffins, thoughtfully placed in a dish or covering a teapot, adding the perfect touch to tea and breakfast setups. Other uses for tea towels include:

It is recommended that tea towels be soaked in warm water right after they are purchased in order to get rid of any extra oil left over from the manufacturing process and to activate the towel’s absorbency. If they are colored tea towels, they should be washed separately from other laundry to avoid running colors. Just like all towels, over time tea towels get stains and build-up bacteria if they are not washed carefully. Use detergent instead of fabric cleaner when you wash your tea towels to keep them durable for longer. This is because fabric conditioners and fabric softeners leave an oily, water-resistant layer on the towel making it harder to soak up moisture. It is better to hang-dry tea towels instead of using a dryer to avoid deteriorating delicate fabric commonly used for them. Hanging tea towels, like on a washing line or clothes rack, should get them dry pretty quickly since they are usually smaller and thinner than other towels. 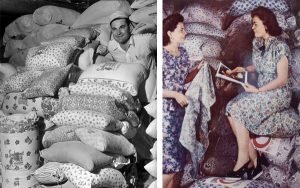 Tea towels and dish towels are both types of kitchen towels. Originally an accessory for the upper class in 18th century England, tea towels are usually much thinner and are traditionally made from linen. They can be used to polish delicate china, furniture, jewelry, etc. and are also often used as décor. Dish towels, on the other hand, originated in the early 20th century America when the Great Depression forced housewives to get creative with the rough cotton from their animal feed sacks and reuse the material for towels, clothing, and other household textiles. Dish towels are used exclusively for washing and drying dishes and should be kept separate from other towels to prevent the spread of bacteria. They are generally made from a more durable, absorbent cotton material. 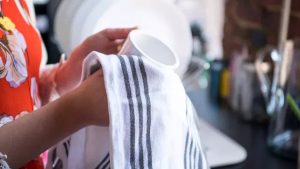 Dish towels, or towels used solely for washing and drying dishware, are probably the most limited type of kitchen towel. These absorbent towels are great for hand-washing dishes, speeding up the drying process without leaving any lint and preventing water spots. They should be constantly rotated, kept clean and be separated from other kitchen towels to prevent spreading bacteria. Dish towels can come in a variety of materials but, unlike looped terrycloth towels, flour sack towels made from 100% cotton like the ones from Cotton Creations are able to dry dishes quickly and effectively without leaving behind any streaks or lint. This tight-woven, sturdy hemmed cotton material is soft and durable. Flour sack towels make great dish towels because they will hill hold up nicely through repeated uses and washes. 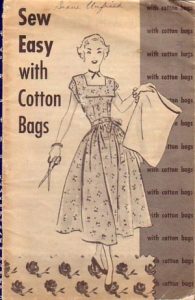 Tea and flour sack towels are interchangeable terms, both characterized as flat-woven towels used for drying without leaving any traces of lint. Originally, a tea towel was thin linen cloth used in the 18th century by wealthy English ladies to polish delicate dishware and it evolved into what is now known as flour sack towels (a.k.a. dish towels) in America during the Great Depression when desperate housewives cleverly cut up and embroidered cotton flour sacks to use as tea towels as well as many other things. Tea towels are known for being a fairly thin towel used for tasks such as drying and polishing delicate things or as decoration for the kitchen. Whereas flour sack towels are typically a thicker, sturdier material that’s also more absorbent and versatile.

If you’re looking for a type of kitchen towel that’s soft yet durable and versatile yet effective, flour sack towels are your best option. Cotton Creation’s flour sack towels are made from 100% cotton material that is soft to the touch but also capable of withstanding consistent use with tough kitchen tasks and re-washing in full load wash cycles. Our flour sack towels’ high-quality material and durable thread count gives them a very long lifetime. Flour sack towels are also lint-free! So you won’t have to worry about unwanted fluff getting left behind after drying your dishes or wiping your windows. They are capable of a wide range of possible applications including: 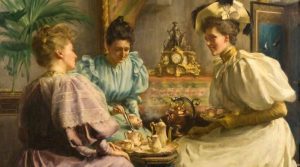 Tea towels originated in 18th -century England as an accessory for the rich made from soft, lint-free linen, a fiber derived from the flax of linseed plants. The soft linen texture of the fabric made them a versatile tool for the lady of the household to dry her bone china, delicate tea sets, and other prized possessions too precious to trust their servants with. They also came in handy during tea tome when they were seen wrapped around teapots for insulation and preventing inelegant drips or draped over a plate of freshly baked pastries just before serving time. Not only did tea towels serve a variety of functional purposes, but they were also a way for ladies to create art and show off their embroidery skills, designing each towel to match the rest of their kitchen table linens and creating beautiful heirlooms to be passed down generation after generation.

Over time, with the increasing availability of textiles and sewing material, factories began mass-producing these towels along with many other household linens during the Industrial Revolution. The tea towels progressed through this process and became available for consumer purchase in a wide variety of fashionable styles and colors that easily coordinated with any kitchen’s décor. It was at this time in the 19th century that tea towel manufacturers began using cotton materials for its softness, durability, and absorbency.

Housewives were not the only ones who saw the artistic potential in tea towels. According to an article from the textile trade magazine, WeavingToday, the ever-famous artist Vincent van Gogh actually used these kinds of towels, as well as whatever other materials he could find at the time, to create his paintings on when he was low on supplies and money. One of these paintings includes a still life piece of flowers in a vase from the end of his career. Believe it or not, that painting, which started out a mere tea towel, sold in action for about 3.5 million dollars! 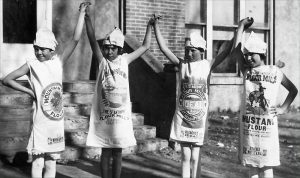 The Great Depression was a desperate time when money for frivolous things like fancy tea towels was scarce. Yet, women were resourceful and able to re-purpose rough cotton sacks by cutting them up and turning them into dish towels (flour sack towels), clothing, and other household textiles! Cotton flour sacks were turned into everything from linens to underwear by frugal housewives and homesteaders. Today, most flour comes in paper packaging, which means you have to purchase flour sack towels from unique stores like Cotton Creations.

Women at this time would also use these flour sack towels to create beautiful works of embroidered art with intricate patterns, despite the roughness of the material’s weave. They would then trade their work with other women in the community for other supplies, resources, and money. Soon after realizing what their customers were doing with their product’s packaging, flour sack companies began designing the cloth sacks with decorative floral elements and nice patterns designs on them. Doing this served as a great incentive for women to buy their product, not only for its aesthetically pleasing quality but also for its utilitarian purpose. They would save these sacks and use them to create clothing as well as other household textiles for themselves and for their families. The crafty women at this time helped to pioneer a tradition in America of transforming the materials we already have into creative yet functional works of art. Thanks, ladies!